In November, our old song, ‘Good Vibes’, was featured on the popular TV show, Skam (Espana) on Movistar+ channel. The song appears in the final scene at the end of Season One. You can see a clip of it here. Written by ex-dropkick guitarist, Roy Taylor, ‘Good Vibes’ originally featured on the Dot the I album (2008 Rock Indiana Records). You can still stream and download it at all the usual platforms and there is literally one original CD left in our shop. It was re-recorded in 2014 for the compilation CD, ‘Good Vibes: The Dropkick Songbook Vol1’.

In October, Andrew played a few successful solo shows in France and Spain. Here are a couple of videos of the house concert in Paris and a show from Madrid. For the gigs, Andrew made a solo acoustic CD of stripped back, acoustic versions of Dropkick songs. There are still a few copies in our shop. Use the code ‘solo’ at the checkout to receive a 30% discount.

As some of you will know, our talented bassist / harmony man, Al Shields, also writes and plays his own music. In July, he played some great opening sets at our Dropkick gigs. He has just released one we recorded in Zaragoza, Spain as a free download. Get it here. You can also still get his latest CD EP, recorded with his band The Delahayes here.

Ex-dropkicker, Roy Taylor has just released a new album under the name United Wire. It’s full of top tunes and is well worth investigating. It also features Andrew’s drumming and some bass playing from Al and old dropkick bass player, Scott on a track. You can get the CD / download here.

Andrew has recorded a selection of Dropkick ‘classics’ in a very stripped-back, acoustic form to accompany his upcoming solo shows in France and Spain. You will be able to stream or download the 20- track ‘Acoustic Vol.1’ from 5th October at all the usual digital platforms. A CD version will be available at the gigs and a limited quantity will be available via our online shop. You can pre-order now and receive the first track from the album, ‘Hold On’ – the rarely played song from the 2011 album, ‘Time Cuts the Ties’. This track was resurrected in Zaragoza, Spain recently via an unexpected audience request – watch the unrehearsed performance here.

You can also read a recent interview with Andrew here for French music website, Section 26.

Longwave was released in Spring 2018 on Pretty Olivia Records and Sound Asleep Records on 140 gram black Vinyl, CD digipak and digitally via all the usual platforms. We still have a very small quantity of vinyl and CDs in our online shop.

Some words about the album:

‘Yet another near-flawless collection.’
RnR Magazine

‘Another Dropkick album, another cause for celebration ….the harmonies are just glorious.’
Blabber and Smoke

‘This is country pop at its finest…arguably their most innovative and well crafted album yet.’
Maverick Magazine

‘The spontaneity and the quality of the songs mean that this is the band’s most compelling album to date, showcasing their melodic invention and talent for melodies….Dropkick have a distinctive voice all of their own.’
The Herald Newspaper

Dropkick’s new album, Longwave, is out now via Pretty Olivia Records and Sound Asleep Records. Longwave is available on 140 gram black Vinyl with printed inner sleeve, CD digipak and digitally for streaming and download from all the usual platforms.

The album has been called “country power pop at its finest” by Maverick Magazine and has already received significant radio airplay, including BBC Radio Scotland and stations in USA, Germany, France, Sweden, Spain, Japan and Brazil.

You can watch the band recording the album opener, Out of Tune, in their Edinburgh HQ here:

You can also watch our film for the album track, ‘It’s Still Raining’, directed by film maker friend Andy Tucker.

The new Dropkick album, Longwave, will be released on 23 March 2018 and you can preorder it now!

The album will be available on vinyl via Pretty Olivia Records (Spain) and as a CD version through Swedish label, Sound Asleep Records. Longwave will also be available digitally for streaming and download. Pre-order information will be available shortly at our online shop.

The 12-track album was written and produced by Andrew Taylor and recorded mostly live by the band in Dropkick’s rehearsal space in Edinburgh, Scotland. Longwave was mastered by former bandmate, Alastair Taylor. The album is also the first to feature the harmonies and bass guitar of new member, Alan Shields.

The line up on Longwave is:

Artwork and design on the new record has once again been overseen by the very talented, Edinburgh-based artist and designer, Alan Lennon.

To support the record, Dropkick will be playing a number of full band and acoustic gigs over the next few months, including a few instore appearances. For the full list of dates, please click here. We’ll also let you know of any radio appearances around the release date.

Here is the opening song from the record, Out of Tune, recorded acoustically in the stunning setting of Burgos Cathedral, Spain on a cold October morning by Andrew and Alan. Filming by Rodrigo Mena Ruiz.

We also worked with our musician and film maker friend Andy Tucker to create a video for the new song ‘It’s Still Raining’ from the new album. Here is the video: 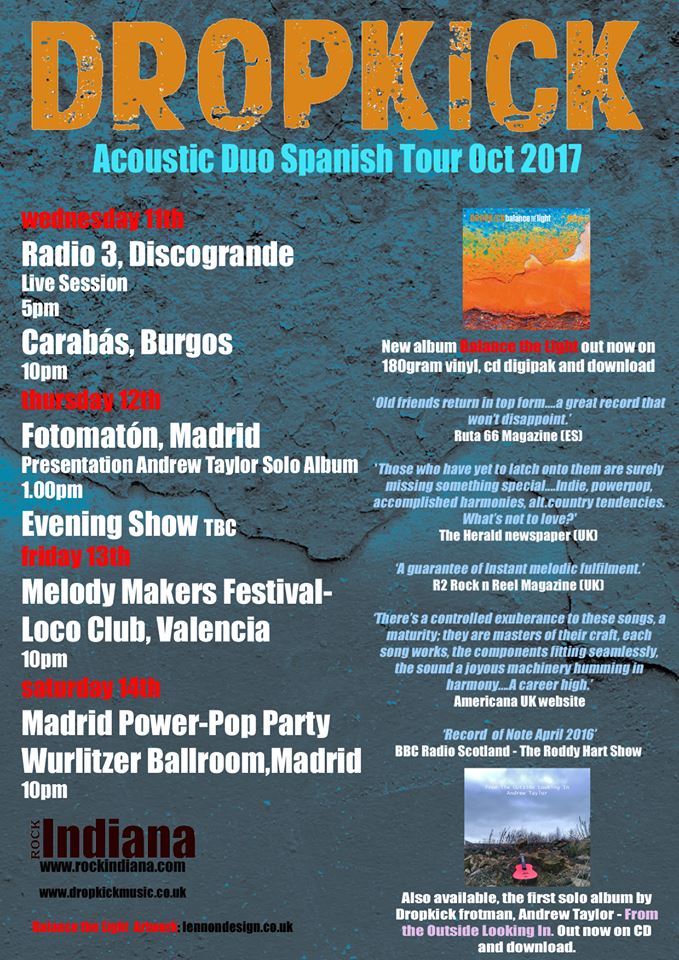 The next Dropkick album has been recorded and mixed and is currently being mastered by our old guitarist, Alastair Taylor. All being well, we are hoping to release this in early 2018 – more details to follow.

Andrew released his first solo album, From the Outside Looking In, with Rock Indiana Records in June. The album received some good reviews and radio airplay including BBC Radio Scotland and Radio 3 Spain. You can read a recent review from The Herald newspaper here.

The CD version of the album is now sold out at our shop, however, you can still stream or download this at the usual sites. Alternatively, you can buy the CD directly from Rock Indiana in Spain or Kool Kat Musik in the USA.

Check out Andrew’s song ‘Won’t You Talk to Me’.

1 2 3 4 5 6
“This is country-pop at its finest...arguably their most innovative and well-crafted album yet.”
- Maverick Magazine
“Those who have yet to latch onto them are surely missing something special....Indie, powerpop, accomplished harmonies, alt.country tendencies. What’s not to love?”
- The Herald newspaper
“There’s a controlled exuberance to these songs, a maturity; they are masters of their craft, each song works, the components fitting seamlessly, the sound a joyous machinery humming in harmony….A career high.”
- Americana UK
“Yet another near-flawless collection.” A guarantee of Instant melodic fulfilment….Dropkick triumph in giving new edge to familiar themes.”
- R n R Magazine